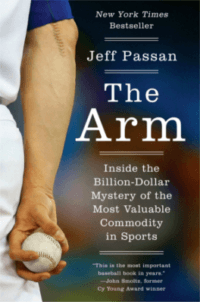 Jeff Passan brings his best fastball to the first sentence of his book, and maintains that velo throughout this really informative book.

1. How did baseball fail the pitching arm?

Before we get to those, here are a few quick Tommy John facts

– Since 1985, it is estimated that over 10,000 players across all levels have gotten TJ surgery for their UCL tears.

– And the scariest statistic: Almost 60% of all surgeries are being performed on teenagers, with that number increasing every year.

“Doctors believe almost every UCL tear is an accumulation injury – a ligament worn down over time that finally relents. Kids play today more than ever, and while the correlationn with the spike in UCL injuries is obvious, many in the sport see the relationship as causative too. “There are so many misrepresentations of our game and how it should be taught and how kids should play it,” said Tony Clark, the executive director of the MLB Players Association. “I shudder at the thought of being told at thirteen years old to choose a sport because that would be my only chance to make it.”

Simply put, kids are throwing too much.

But why are they throwing too much?

Training techniques have become so advanced and it is safe to say that the easiest way to build velocity is through year round throwing.

And year round throwing is the single highest predictor of future injuries among kids.

The training and science have gotten too good.

“The nearly 1/3 of MLB pitchers who average 93 MPH on their fastballs are nearly twice as likely – 21.2% to 11.2% – to end upon the disabled list the next season as a pitcher whose fastball velocity fails to crack 90, according to a study from Jeff Zimmerman of the website Hardball Times. For those who throw 96 plus, the chances of a DL trip the next year jump to 27.7 percent.”

It sort of reminds me of football. The guys in the NFL are so big AND strong AND fast that they can’t even run into each other any more without getting concussions.

But obviously, you can’t un-ring a bell.

If you decide to take the smart route and curtail your throwing, you may only throw 80-85 instead of 90-95.

A healthy pitching arm does you know good when nobody wants you.

The other reason why kids are throwing so much is because of the travel ball culture.

Basically, nobody in baseball thinks these showcase events are good for the kids.

Showcase companies like Perfect Game got their name drug through the mud a bit in this book – painted as companies who exploit youth and cause unnecessary overuse in order to make their own profits.

Perfect Game has a player ranking system, and guys will do anything in order to improve their numbers.

Years before MLB used on field technology Perfect Game was using the Trackman radar system to capture pitching velocity and batted-ball exit speed. This encourages young players to throw harder, run faster, hit longer, all so they can scale the online leaderboards.

I think the portrayal is a little harsh.

Everyone in America is free to make a profit, and they *do* provide a venue for kids to be seen by large numbers of scouts and recruiters…not a small value there.

The owner of Perfect Game, Jerry Ford, said it well: “The problem is there’s this thing called winning. That’s what seems to make people crazy, not Perfect Game.”

Parents and players have to take personal responsibility here and be willing to say no to opportunities to play.

But it is easier said than done.

The sense that you’re getting left behind when you don’t attend an event or play travel ball is strong.

Parents want their kids to be happy, and they see their kid likes baseball.

The thought that their kid will miss out on a college scholarship or a big league career leads them to have the kids play more than they should.

I think most parents see this too. They don’t like all of the playing (and surely don’t like paying for it) but feel like this is the nature of the beast that is youth baseball.

In fact, kids who had pitched competitively for more than eight months of the year were five times as likely to undergo arm surgery.

– Kids who pitched more than one hundred innings in a calendar year are three and a half times likelier to get injured than those who don’t.

The problem is even worse in Japan.

I was shocked to learn how much they throw over there.

For example, Daisuke Matsuzaka would throw over 150 pitches per day, even the day before starts (supposedly he’d throw over 300 pitches per bullpen session with the Red Sox in spring training.  90 minutes, never stopping!).

There are two surprising reasons why they throw so much in Japan.

The Japanese are big on honor.

And I really like that about their culture in general.

But, on the baseball field honor translates into a kid putting his team’s success wayy before his own health.

Japan has a high school tournament every year comparable to March Madness here in the US.

It’s a huge deal in their country. What these teams do is if they have one great pitcher, they ride him like a donkey.

One top prospect was throwing 94 in his first game, and a week later at his team’s sixth game (5 of which he had pitched in!) he was throwing 83.

The other reason why they throw so much is because they believe they’re at a physical disadvantage.

The average Japanese male is smaller than the average American, thus the widely endorsed thought in Japan is that they must train differently – honing perfect mechanics through almost endless repetition.

Passan’s research seemed to bring this school of thought into question, nothing has really been shown that the Japanese arm is different when comparing similar sized players.

The same study in the US found 25.5% admitting to pain.

Step 1, get them more rest.

But what else is there?

Proper mechanics is paramount, everyone agrees.

However, getting a consensus on “proper” mechanics is the tough part.

Passan spoke with many of the guru’s in the industry and while all had compelling cases, they all had a fair share of detractors as well.

The company – or guy, rather – who Passan seemed to believe in the most is Kyle Boddy, owner of Driveline Baseball in Puyallup, Washington.

Under Boddy’s guidance, he had a former TJ recipient Casey Weathers throwing 105.8 MPH.

One hundred and five point eight!

Now, this was with a crow hop and not off a mound, but this is insane.

We’ll dig into the Driveline teachings some other time, but for a free sample workout of Casey Weathers at Driveline, see the link at the bottom of this post.

Passan found the work of one Dr. James Buffi to be very encouraging.

Without getting too technical, he is touting the importance of the flexor-pronator muscles, particularly the flexor carpi ulnaris (I’ll be honest, I had to google where these muscles were) had an important role in protecting the UCL.

By measuring the torque applied to these muscles during a pitch, Buffi was blindly able to correctly identify 18 out of 20 pitchers whether they had arm trouble or not.

A deeper look into Buffi’s findings and prevention can be found here: https://www.drivelinebaseball.com/tag/dr-james-buffi/

There are also a few new Tommy John methods that may drastically reduce the recovery time – like a new tape that can wrap the new ligament around the bone instead of drilling into the bone, which could save 6 months off of the healing process.

Ironically enough, Tommy John’s own son – Tommy John III – is leading another revolution (if you can call it that – the use of ARPwave machine.

Passan found not one piece of verifiable evidence that this method works, other than people who have tried the method and said it works.

“I don’t know if the ARPwave is just another machine that leeches thousands of dollars out of patients or one that can replace platelet-rich plasma therapy as the go-to method to help damaged but still intact UCLs. For his varying philosophies, Dr. Tommy John is unquestionably right about one thing: he believes the human body is a sublime creation capable of the seemingly impossible” Passan writes.

What Do We Know Now?

So in the end, I think we learned that there’s hope that we can reduce the instances of arm injuries, but eliminating them will never happen.

Throwing less is something that is vitally important, and I think we’ll see people being smarter in the near future – simply from better education like this book.

When it comes to training methods, we’re still left wondering who to choose.

I’m not a kinesiologist so I can’t comprehend the validity of “shoulder pronation”, “inverted W”, terms like that.

I think we just have to look at the results.

Are their players having good results?

Are they staying healthy?

If so, then it’s worth listening to.

Please go check out The Arm for more info, and you can always leave a comment with any questions.

Passan also wrote extensively about Todd Coffey and Daniel Hudson and their road to recovery. Very compelling stuff, you’ll forever be rooting for those two (or at least Hudson 🙂

So, tell me your experience.  Have you worked with a guru/thought leader that you think is on to something?

Or is full of it?  Leave a comment below

(I highly recommend taking a look at this book.  It’s only like $16 bucks!  Buy the book here