The ONLY Problem Your Son is Actually Facing – Baseball Notes 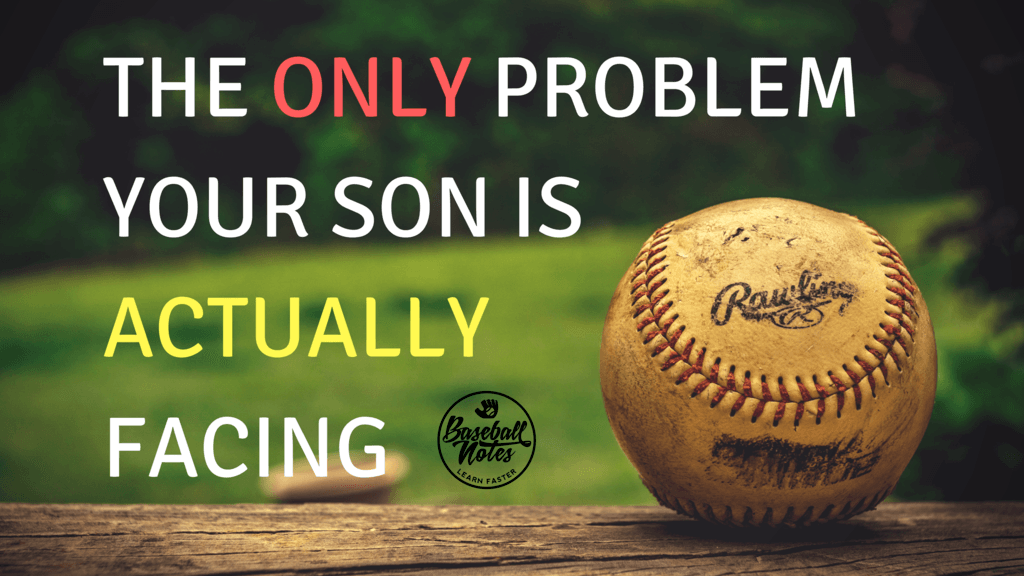 Your son (or daughter) is struggling with A LOT of problems right now I bet.

Not hitting with enough power.

Striking out too much.

But really…these ARE NOT PROBLEMS.

The only problem your child is experiencing…

…is the thought that he shouldn’t have any.

You’re probably like, “What’s this dude saying?  I don’t know about this, we have REAL problems over here!”

Everything that you are going through that *feels* negative is actually spurring you to grow.

I need you to read this whole quote from Denis Waitley’s book The Psychology of Winning.

So you’re gonna read the whole thing for me?

“One of the best ways to develop adaptability to the stresses of life is to view them as normal.  Earl Nightingale tells of his visit with his son recently to the Great Barrier Reef which stretches nearly 1800 miles from New Guinea to Australia.  Noticing that the coral polyps on the inside of the reef, where the sea was tranquil and quiet in the lagoon, appeared pale and lifeless…while the coral on the outside of the reef, subject to the surge of the tide and power of the waves, were bright and vibrant with splendid colors and flowing growth…Earl Nightingale asked why this was so.  “It’s very simple” came the reply, “the coral on the lagoon-side dies rapidly with no challenge for growth and survival…while the coral facing the surge and power of the open sea, thrives and multiplies because it is challenged and tested every day.  And so it is with every living organism on earth.”

I love that so much.

This is an absolute fact of life.

As the super-beast Tony Robbins would say:

“Life is not happening TO you, life is happening FOR you.”

Or to bring it back to our world:

This game is not happening TO you, it’s happening FOR you.

You see, things that are fine….

I promise you, there are a TONS of players who are having success right now…

…who are loaded with flaws that they are not addressing.

They aren’t putting in the extra work to improve.

I had a teammate of mine in the minor leagues who was Mr. Everything growing up.

6’5”, all state pitcher, hitter AND Quarter back in High School…

…in fact he had a scholarship to a big time college program to play baseball and be their quarterback which he passed on to sign a pro contract.

Good dude, I really liked him.

But he had never faced much adversity in the sport.

And he didn’t work hard.  He started skipping mandatory workouts, so our manager said he’d fine people who missed workouts…

…and he was just fine with sleeping in and paying the fine.

That type of thing.

Well, he continued to be Mr Everything.  Just a hoss of a pitcher, mowed through our league.

But once he got to Double A, things changed.

For the first time in his life, he got rocked.

And he never recovered.

All of that talent and promise and he was out of the game less than two years later.

While he seemed to have everything you’d want, he was that coral on the inside of the reef.

He didn’t have the good fortune of being challenged on a regular basis.

So when you look back at the list of things that your child is struggling with, there’s two things I need you to remember:

You may not be able to see it now, but it’s true.

This is completely necessary and normal.

This game is WAY too hard to not have “problems”.

Of course your child has the things they need to improve, but so does everyone else.

The *thought* that you shouldn’t have problems is what’s causing ALL of the other real dangers to deepen:

These *INSANELY COMMON* problems are all a byproduct of the player thinking they are riddled with problems and flaws.

This is not true.

Change the way you look at the “challenges” that are in front of you right now.

They are not happening TO you, they are happening FOR you.

About the Author Clint M McGill

I absolutely love reading your articles, watching and listening to your videos. My grandson will be 8 in August and he eats, sleeps and breathes baseball!! He’s been playing since he was 4. And yes, I am very, very biased!! But, he’s that kid that walks out on the field and just looks like a ball player, you can see it. You know what I mean? But, my point is I read and watch just about everything you put out there and find a way to incorporate it not only into his game, but his life too!! Thank you for what you do for these young atheletes and keep’em coming!!!