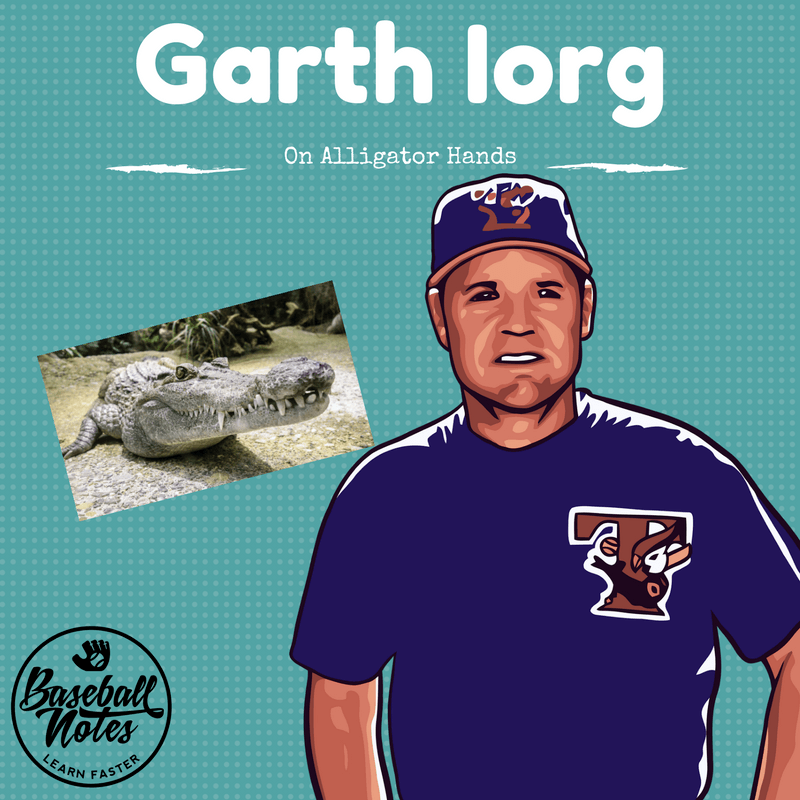 Ok, I gotta come clean on this one.

This past season I coached my son’s baseball team (he’s 7).  At practice one day we’ve got the boys fielding ground balls, half at third base  and the other half at the pitcher’s mound.

Now, there were a lot of things that I was just alright at as a player, but if I was good at one thing it was fielding a ground ball.  I made it to pro ball mostly on the strength of my defense.

So you would think I would know what I’m talking about, right?  I know I thought so.

So we’re hitting them ground balls and I’m pounding home three keys – widen your feet (they’re always standing too tall), get your bottom down low, and finally – get your free hand on top.  Like a clock, twelve six.

“Come on Aaron, get that hand in there.  Let’s go Kayne, get that free hand up there on top.”

I mean, that’s what my high school coach taught me.  He said to keep that hand up high to protect my face and to be more sure handed.

So this was on a Tuesday.  On Wednesday (YES, THE VERY NEXT DAY WEDNESDAY) I talk with Garth Iorg.

Garth played for 9 years in the big leagues and spent much of 20 years at the Major League level as a first base coach and was also the minor league infield instructor for both the Blue Jays and the Brewers.  So the man is in the top .01% of instructors, particularly in the infield.   Naturally, I ask him about fielding a ground ball.  Here’s what he says:

Me: “Is there anything commonly taught today that you don’t really agree with?”

Garth: “What I see the way they teach infielders how to catch a ground ball.  And they use that alligator method, and i think its horrible. “

Garth: “Yeah.  Twelve and six, yeah.  Everyone does that except latins.  I like one handed or hands like, kinda like how you’d catch an egg.  You wouldn’t catch it in the back of your palm, you’d catch it it more in the, ya know, give with it a bit so you can be a little softer and your hands would be together.  Little finger against little finger.  Not that close but something like that.  Something where your glove is not so stiff.  That’s what I teach.  I would never teach the alligator method.  I think it is horrendous.”

Yeah, me neither Garth!

Now this is why these interviews can be so helpful.  Here I am, played into my mid 20’s – a good defender- and I had NEVER heard this before.

Garth: “I don’t know where it came from.  I think someone made a video about it at some point and it just caught on.”

Clint: “So why exactly don’t you like the 12/6 alligator hands thing?  Does it make the shoulders awkward, tightening yourself up?”

(You can see my brain is kinda figuring this out at this point.)

As soon as our call was over I headed over to the google machine to see if I could video of high level guys in the MLB – particularly Latins – going without the alligator hands.  Look at this picture of Jose Iglesias of the Tigers: 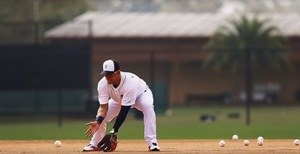 And check out his shoulders, how even/level they are.  Everything looks relaxed.  He DOES look like he’s about to catch an egg.

Meanwhile, check out us Americans: 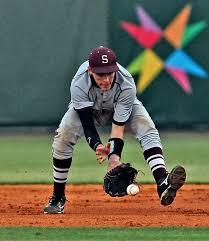 So is the alligator thing dead?

Garth did note that there are a lot of guys at the big league level (mostly Americans) who do the alligator thing – but not the best ones.  The best all have their hands at about 8/6 on the clock.

Thursday was our next practice.  I thought I would be having to un-teach the boys the hand position we had been working on, but the funny thing is – that the hand to the side of the glove is so much more natural that once I stopped harping on it no one was even doing the 12/6 move.  Every now and a kid would stick just his glove down there at a ball hit right at him…but no 12 and 6!

So what do you think, is this a better way to field a ground ball?

Am I the only one who has been teaching the alligator hands?